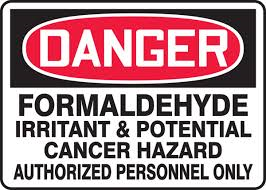 The 12th report released by the National Toxicology Program featured a discussion on Formaldehyde as a Carcinogen that could be found in quiet annoying quantities in indoor spaces. As a potential carcinogen, it’s important to take note of formaldehyde exposure risks and how they may impact your health and well-being.

Formaldehyde is considered an organic chemical which is now very common in our environment. It is a colorless gas with a pungent odor, which can be very annoying to the lungs, eyes and nose. It could be traced to the aldehydes gas family and it can be used as a preservative in medical mortuaries and laboratories. It is a natural occurring gas that can be discharged into the air via off-gassing from a variety of items and products easily found within most homes and offices that contain formaldehyde in their formulas. Other sources that can facilitate the release of Formaldehyde into the air are cigarettes, automobiles, burning wood, natural gas and kerosene.

Should you be worried?

High levels of formaldehyde exposure has been known to trigger asthma attacks in children and in adult asthmatics, and a recent article in the Journal of Occcupational and Environmental Medicine has reported that fertility can also be affected by formaldehyde exposure. Studies showed that Formaldehyde levels are typically around 0.03 parts per million {ppm} in the air (indoor and outdoor air). In rural areas, outdoor levels have a lower concentration while that of urban areas have a higher concentration.

The level of Formaldehyde in indoor air depends on some influencing factors like humidity, air exchange rates and temperature levels. The level of Formaldehyde in indoor air can also change at any time. It can change day to night, day to day, and season to season, and levels could be low on a dry, breezy day, while quite high on a humid and hot day with breathing difficulties being experienced at elevated levels above 0.1 ppm.

The most common historical source of formaldehyde exposure is via Urea Formaldehyde Foam Insulation (UFFI).  UFFI was typically installed to save energy in homes and the levels of Formaldehyde within the home would increase right after the installation of this energy saver, until it has completed the off-gassing process. Durable press fabrics, coated paper and drapery products are also some historical sources of formaldehyde. Early 1960, allergic reactions to Formaldehyde exposure were also recorded. This was attributed to the use of Durable press fabrics, coated paper and drapery products within the space.

Some products have been discovered to have the capability of trapping and releasing Formaldehyde within the home. These products are most likely to be the major contributor to Formaldehyde levels in indoor air.

Other minor sources include shampoos, hair care paroducts (particularly hair smoothing products), baby wipes & soaps, nair polish, disinfectants, fabric dyes, deodorants, cosmetics, and plastic grocery bags just to name a few. Formaldehyde has also been observed to be formed in indoor air through the chemical reaction of the air and volatile organic compounds when computers, photocopiers and laser printers are put to use in the home.

Eye: the health effects on the eye can include stinging, itching and burning.

Throat and Nose: adverse health effects of being exposed to formaldehyde include burning, itching, and sore throat, sneezing, running nose, and an increased risk of cancer.

Respiratory System: the health effect of being exposed to formaldehyde on the respiratory system of the body includes chest tightness, asthma and wheezing.

Skin: flaky dry skin, rashes and contact dermatitis are some of the more common dermatological symptoms of exposure to formaldehyde

Neurological System: Some neurological health effects of formaldehyde exposure can include headache, nausea, insomnia, and impairments in memory and dexterity.